Arizona State University student Yessenia Acosta Terrazas was torn between becoming a teacher or an attorney, but participating in a new pilot program made up her mind.

She is headed for a law career.

“For the longest time I wanted to be a teacher,” said Terrazas, a 20-year-old ASU junior who is seeking concurrent degrees in justice studies and political science. “However, my family went through some immigration issues when I was in elementary school. Seeing how the lawyer helped my family made me want to become like him.”

Now Terrazas has the capability and opportunity to become a family/immigration attorney as one of 11 cohort members in ASU’s Critical Legal Preparation Program, conceived of and implemented by the Center for Indian Education.

The goal of the course was to prepare students and recent graduates to succeed on the LSAT and in law school, while critically engaging the relationship between law and justice to spur change that benefits historically disenfranchised communities.

“Everyone in the cohort will be eligible for a top-tier law school and now have the credentials to go,” said Bryan McKinley Jones Brayboy, President’s Professor, director of the Center for Indian Education and ASU’s special adviser to the president on American Indian Affairs. “This has the opportunity to change their lives.”

Members of the cohort received certificates of completion and had an opportunity to tell an audience how their lives were transformed at a celebration luncheon and networking event Thursday on ASU’s Tempe campus. In addition to a handful of cohort members, the event was attended by instructors, administration, staff, attorneys and judges.

“This work is fundamentally about how do we create and build pathways for people to become lawyers and have a career in law, and to be able to engage in a legal system that is more just?” Brayboy said. "How do we help the judiciary look more like the population of the state regarding gender and race?"

Brayboy said the pilot program was initially geared toward Native American undergraduate students seeking a law career who had limited access to law schools and pathways to legal careers. However, he said the center saw a need for all underrepresented, first-generation or Pell-eligible students at the university and extended invitations to them as well. 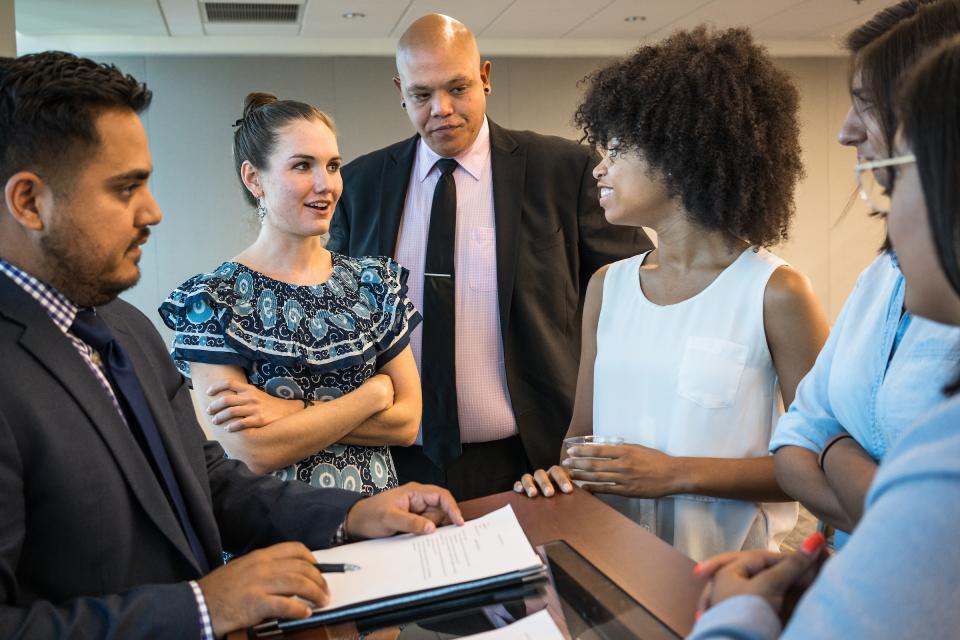 (From left) Nicholas Bustamante, Hannah Duncan, Jeremiah Chin and cohort member Navona Carter talk at the podium prior to a panel discussion about the Critical Legal Preparation Program on Thursday. Photo by Charlie Leight/ASU Now

“The lack of representation among Native Americans, African-Americans and Hispanics in law and the judiciary is alarming,” said Hannah Duncan, a research associate at the Center for Indian Education, who along with postdoctoral research fellow Jeremiah Chin spent a year crafting the program. “All three are disproportionately low.”

Duncan, an Arizona native who will attend Yale later this fall, is basing her statement on a 2016 report by the Commission on Minorities in the Judiciary appointed by the Arizona State Supreme Court. The numbers showed that white males dominated the playing field in terms of attorneys, judges and other positions of power.

During its inaugural year, the cohort participated in two new courses — JUS 494: Power and the Law and SST 498: Justice and Praxis. Both courses provided students with the practical skills to succeed in the law school admissions process, introduced mindfulness techniques intended to reduce test anxiety and gave students an opportunity to study directly with practicing attorneys and judges in Phoenix.

“We discovered that mindfulness based on stress-reduction research worked well for the LSAT test and was something students could also use for their entire legal careers,” Chin said. “The test is a huge source of anxiety for students, particularly those who are first-generation.”

ASU senior Erika Galindo said she had serious anxiety when she started the course, but it dissipated over time.

“The thought of studying the law was absolutely a daunting idea,” said Galindo, who is a double major in transborder Chicana/o and Latina/o studies and justice studies in ASU’s School of Social Transformation. “Taking the course has definitely helped to lessen that feeling.”

So did the mindfulness component, which was taught by instructors from ASU’s Center for Mindfulness, Compassion and Resilience. The cohort learned techniques to deal with test anxiety and stress in their daily lives, as well as healthfulness, personal balance, journaling and resilience concepts.

“When we first began, I was incredibly hesitant because it seemed a little out there,” Galindo said. “By mid-semester, I was finding myself taking what I was learning in the mindfulness sessions and applying it to my day-to-day life.”

The all-female cohort also bonded, said 22-year-old Janessa Doyle, who graduated in May with a justice studies degree and a minor in business.

“When we all gathered for the first time and we noticed it was all women, I thought it was cool,” Doyle said. “We were very comfortable around each other, and we bonded as a group.”

Together they made court visits, reviewed case law and received instruction by 10 federal and Arizona state judges on a weekly rotation. Duncan even got her parents, David and Sally, both judges in Arizona, to appear as instructors.

“I agreed to participate because it’s vital that access to judges and the law be made available to everybody,” said Maricopa County Superior Court Judge Sally Duncan. “Access to the judiciary is important because it humanizes us and makes the goal attainable.”

Duncan, who has continued meeting with several cohort members in the weeks following the course’s conclusion, said she kept her message to students short and sweet.

And that’s exactly what Terrazas, Galindo and Doyle intend to do.

“I want to work with minorities and be the type of lawyer that can help underprivileged people,” Terrazas said. “I’m also open to the idea of becoming a public defender.”

Top photo: Senior Erika Galindo speaks in a panel discussion about the Critical Legal Preparation Program on Aug. 9. Eleven students were in the insugural cohort of the program that was designed to increase underrepresented undergraduate students' access to law schools and legal careers. Photo by Charlie Leight/ASU Now